If you have been a long time follower of this blog, you may remember that I posted a series of spreads from the 50th Wedding Anniversary trip that I took with my parents.  Well, that whole album actually occurred during 2018, and I wanted to reference it in the 2018 album so that I would not forget that this is where that set of adventures fell chronologically.    So I created this spread from all of the leftover embellishments that I purchased for that album.  You will notice several of the elements that appear in the album make a reappearance on this spread – the wooden bear, the green tree brad, and the butterfly image.  I used a printer to print out the reference to the other full album, since I don’t have neat handwriting, and then bordered it with a dark border created with corner punches.   The bear image is the left over from a cutout that I was making for another spread that you will see later, and I didn’t want to waste it. 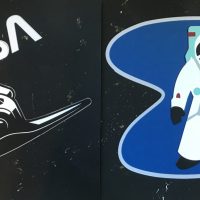