After Christmas our family crowded into my rental car, and we started to head north, ultimately to get to Hearst Castle where my aunt used to spend her summers working as a tour guide. On the way up we stopped to see the Madonna Inn. This is an amazing and eclectic hotel that would be a fabulous stay for any adventurous couple. The history of the Madonna Inn can be found HERE, and it is worth taking some time to scroll through the pictures from the various rooms, each one which has a unique design. The hotel and many of the rooms are designed with hot pink colors which you can see reflected in this spread.

The lefthand page is the paper bag from the gift store and I complimented it with a pink scroll background paper on the lefthand page. The pictures of the hotel and the public men’s room are postcards that I bought in the gift shop. You may wonder why a picture of the men’s restroom? – well the answer is that the urinal is a waterfall! When you step close to use it the water starts running down the rock face.

I took the picture that is in the middle, and to help it match the postcards I put a white border of the same width on the postcards so that they all look the same. In order to get the long postcard at the top to fit on the spread, as well as show as much of the bag design as possible, I decided to put two of the pictures across the page split and cut them so that it would work.

The embellishment in the top righthand corner is a patch from the Madonna Inn that I purchased in the gift shop.

Video of the Waterfall Urinal:

Video Tour of the Madonna Inn: 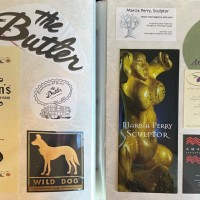 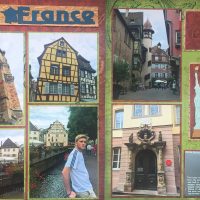 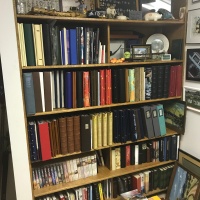 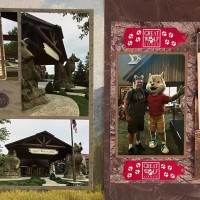 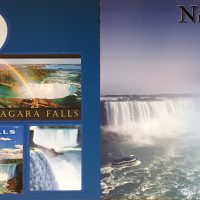 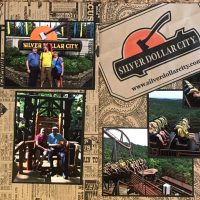 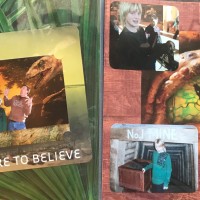 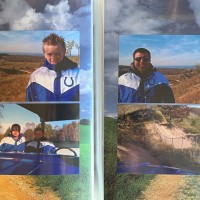