We discovered soon upon moving to Indiana that there was an event held every October near the Mississinewa River called Mississinewa 1812.

All of our new found friends kept talking about it, so I knew that we needed to go and check it out.

Wikipedia explains the Battle of Mississenwa as “an expedition ordered by William Henry Harrison against Miami Indian villages in response to the attacks on Fort Wayne and Fort Harrison in the Indiana Territory.”

When we arrived we discovered that much of the reenacting was not a reenactment of the Battle of 1812, as much as a display of the different kind of troops from various areas and Nations that were involved in the Battle of 1812 all around the country.  This didn’t matter too much to us as the whole experience was informing, exciting, and delicious!

For this spread I selected background pages suggested by the tan in the bag on the left hand page, and patterns that I felt fit the period.  On the right hand page you can see that I created an edge border with rough burlap. (See note at bottom of page).

I placed the program for the day inside of the page which I purchased from a vendor at the event.  We also purchased a small bag of candy at the event and that candy bag made it onto the right hand page.  The “Mississinewa 1812” over that bag is a picture that I took of the entrance sign that I carefully cut down to size.

I used a corner cutter to cut the corners of all of the pictures, and I think that this added interest to the page.

Note – Saving Scraps: The burlap border edge was left over from the San Diego Zoo project.  I used the burlap to serve as a border for the photographs in that project.  I always save all scrap pieces from projects because I never know if I will be able to use them perfectly in another project. 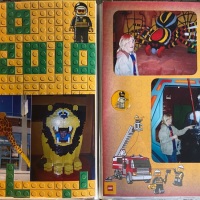 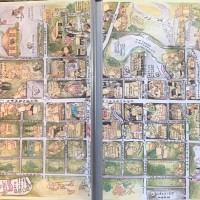 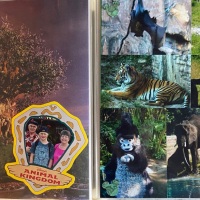 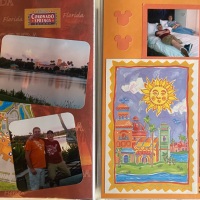