While in California we had to spend a day at the Beach.  The water was cold but we got in it for a little bit.  It was the end of December after all!

We went to Venice Beach and then walked all the way to the Santa Monica Pier where we enjoyed a seafood meal at Mariasol – a restaurant at the end of the pier.

The Santa Monica Pier is the official Western end of Route 66 – later in 2014 we visited the eastern most edge in Chicago.

I chose Hawaiian beach print for the background pages and then placed the photographs in a simple square pattern.  I had two fish push pins that I place in the center of the photographs, and I had to include the business card from Mariasol. 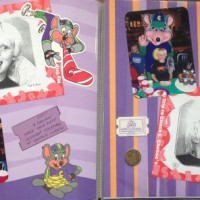