On the 13th of August 2017 we went to the Indiana State Fair – which we have done a couple of times during the past few years – see the Scrapbook pages from 2015.  This time my son and I went with the goal of eating one of each item that was sold at the “Deep Fried” food truck.  My goal was to try the deep fried butter, which by the way was surprisingly delicious.  This was a great idea, until about half way through when both of us started feeling very sick, which cut our day short, which I am quite sure was due to a fat and sugar coma that we were in.

We did get the opportunity to explore about half of the fair and the pictures that I thought were the most fun have made it onto this spread along with the pressed commemorative medallion from the 2017 Fair. I choose an Indiana background paper which I had found a couple of months earlier, and I oriented all of the photos on the spread with the “Indiana” postcard that was already pre-printed on the paper.  I then cut off the parts of the photographs which were over the edge to match the postcard.

I also attached the program/map from that days activities to the outside of the plastic page protector so that it could be opened to view. 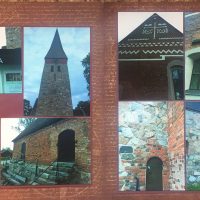