This spread is another example of putting two unrelated events on the same spread. This was a difficult pair to make a cohesive spread from and so the main tie is that the titling on both pages are cut from the same color using my Cricut machine.

The left hand page is from a visit to the Ringling Brothers Circus with about 80 of our friends – the Residence Life team at Point Loma Nazarene University.  The lady in the picture with my son is one of our good friends who supported us through our adoption process.

The right hand page remembers a day long trip to the Quarry in San Diego for a day of CORR (Championship Off Road Racing) racing.  A cool story from this day is that there was a terrible wreck (fortunately no one was hurt).  Our friend Steve, who got us tickets to the event, knew some of the people working the event, and they handed him the front bumper of the car that wrecked and he gave it to my son.  About an hour later they were interviewing the driver over the announcement system and I heard them say “Look, here is a boy with a piece of your car!” My son had run over to get the bumper autographed by the driver!  About two weeks later the race was on TV so we recorded it onto a DVD and maybe one day that bumper will be worth something! 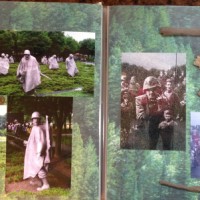