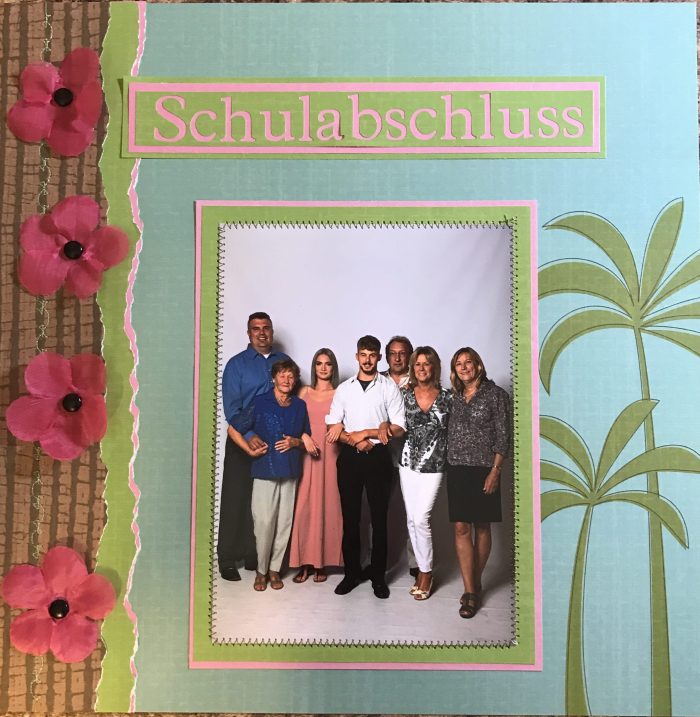 I am going to take a little segue here to show you the album that I made for Luca’s High School Graduation (or Shulabschuss in German).  The event was called Abiball  and is very different to an American graduation – they are part awards ceremony, part dinner, part dance. It is a cool combination that creates for a memorable experience for students and their families. We started with a dinner, then moved on to an awards ceremony, and then all of the families left, and the students and faculty went out to dance, (and drink I gathered).

I wanted to give Luca a scrapbook of the event as a graduation gift, and I made this once I was back in the States and mailed it to him when I was done.  The theme of this event was tropical, so I chose a tropical theme for this album.  On the above title page I used tropical background paper and a triple torn edge border.  I cut out the title using my Cricut machine, and instead of using the letters, I decided to use the remaining pieces which gives a reverse video effect.  The pink flowers are from a Hawaiian lei that was on our table at the event.  I used my Crop-A-Dile to put holes through the paper and black brads to attach the petals.  I finished the border to this page by using my sewing machine to sew a ribbon pattern along the edge of the left hand side border.  I also used my sewing machine to attach the professional photo from the event to the page by stitching around the edge of the photo.

The second spread contains professional photos from the event, and I chose a blue theme for this page to match the blue of Luca’s grandmother’s shirt and the blue shirt that I was wearing. I used my sewing machine to add some intricate patterns to the page – both in attaching the photographs, but also in the borders.  I used torn edge borders to provide interest on the page, and continued the tropical theme by using seahorse paper for one of these borders, which can also be seen in one of the borders for the photographs.

This third spread contains photographs that I took during the awards ceremony.  Luca won the award for best grades in English which was exciting for both his mother (who is an English teacher) and myself.  I themed this page in purple to match the colors from the photographs, and used a tropical paper to keep the theme of the album.  I used a triple torn edge border on the spread, and a triple border on the photographs.  I alternated between a plain color border and a patterned border (stitched with my sewing machine) to draw the eye of the viewer onto the photographs.  I finished up this spread by using my sewing machine to stitch the star pattern onto the border strips.

The fourth spread highlights the dinner part of the event.  The left hand page has the menu for the night, and the right hand side has pictures of the food, along with the silverware paper holder from the event, and some silverware that I cut out using my Cricut machine.  You will notice that I attached all of the items to the spread using my sewing machine, and also stitched a border on the right hand side to hold down the double torn borders.

The fifth spread has the program from the evening and some pictures from the event.  The top picture is the screen announcing the event in the lobby, and the bottom picture is of the principal singing a song to the graduates.  Each year he write a song that includes the name of every graduate in some way.  Apparently it was pretty funny because it got a lot of laughs, but because it was in German I understood very little of it.

I continued the tropical theme on this page, and added some more of the petals from the leis that were on the tables.  Notice that on this spread that I put a very thin black border on the program and the photos, before adding a second larger and busier border.  This helps the photographs to stand out against the busy border.  I copied this technique in the double torn border on the left side of the spread.

The sixth and final spread contains pictures from outside of the venue that a family friend took.  I also added the ticket to the event on this page, and some of the flowers from the leis that were on the tables.  I used my sewing machine to attached each of the pictures to the page.

There were some additional blank pages that I put into the album so that Luca could keep any congratulation and graduation cards that he received in the album as well. 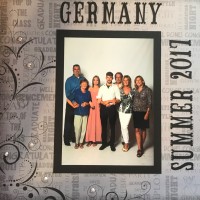